Time to sneak in one last review for the month. And I am really excited about this one. A few weeks ago I got my new library card (priorities, right?) and hit the shelves looking for a too long list of books high on my TBR. I could only find a few of the books I was looking for (I had to reserve the rest).

Hotel on the Corner of Bitter and Sweet by Jamie Ford was one of them. I have been wanting to read this book for a while so I was excited when my old book group decided to read it in September. I am still hoping to Skype into the discussion 🙂 What surprised me is how little I actually knew about this book going in. I didn’t realize it was set in Seattle or about the Japanese internment in WWII. I thought it was just about a hotel. Perhaps this lack of knowledge pushed me to love this book from the first page.

While reading this book, I had an experience that stuck with me. Our new apartment complex has a community pool. Last week, we took our daughter swimming one morning. After we had been there for about a half hour, a little Asian girl and her grandfather came into the pool area. She started playing with us, telling me what to do (haha), and eventually was soaking wet even though she didn’t have a swimsuit on. Her grandfather encouraged her to play and to swim and to be nice in another language. All I could think about the whole time was Keiko.

Hotel on the Corner of Bitter and Sweet by Jamie Ford is the coming of age story of two children–Henry and Keiko. We begin with Henry at the Panama Hotel in 1986 where the belongings of dozens of Japanese families were found in the basement. When he sees a Japanese umbrella, he decides to search for something of infinite value to both he and Keiko. Henry is Chinese and Keiko is Japanese. But in 1942 their backgrounds should make them enemies. Henry and Keiko meet at Rainier Elementary where they are both scholarshipping. They form a fast friendship which blossoms into love. But the world around them fears the war. Keiko and her family are sent away to a Japanese internment camp. Against his father’s wishes, Henry promises to wait for Keiko. But time and distance can change everything. Can they continue their love story beyond the war? And in 1986, can Henry uncover the past and all the memories that come with it?

Henry is such an interesting protagonist because we get to see him both as a 12 year old as as a middle aged widow. In many ways, the Henry of 1942 is much the same as the Henry in 1986–brave, kind, and willing to stand up for what he believes is right. He was immediately likable for me. I was cheering for him against the racist bullies at his school, against his father’s arbitrary beliefs, and against the world views of the time. As the story progressed, I only liked him more. I cried when he risks everything for Keiko, when they say goodbye, and during the many moments when Henry had to grow up too fast. I want my kids to have friends like Henry.

Keiko is a dynamic character that deserves more attention in the novel. I would love to have gotten inside her head and learn more about what she is thinking and feeling, especially when she goes to the internment camp. I think Keiko is a great friend because she brings out the best in others–especially Henry. Keiko is passionate–about art, about family, and about life. I am amazed at how she lives in the camp and also how she overcomes difficult situations. She isn’t passive or submissive. But she is also smart. I admire her strength.

I have not read a love story that pulled me in quite like this one. What’s amazing is how the love between Henry and Keiko just grows, and we all don’t even notice it’s there until it’s too late to turn back. I love their innocent love for each other. I love the stolen moments they have during lunch hour or walking home. I love the scene when they go to the jazz club and have lunch with Keiko’s parents and kiss through the camp fence in the rain. It feels genuine, authentic, palpable. We know the ending for this love story from the beginning of the novel, but the twists to get there are an unexpected and beautiful journey. 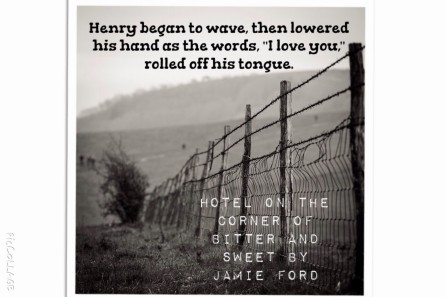 The perspective on WWII in this novel is unique and illuminating, especially as I am an American. Henry’s I am Chinese button had me thinking differently about race and war from the first time he puts it on. I didn’t know much about the Japanese internment or how Asian people of any descent were treated during the war. Frankly, I’m a bit embarrassed by and a bit sympathetic towards the whole situation. Yes, fear was everywhere during this time and that can make people panic. But people deserve a certain amount of respect. Perhaps this story is a lesson for me in how to treat others. I couldn’t believe what the Japanese-Americans had to go through, and Keiko didn’t even speak Japanese!

My favorite part of the novel was the dual timelines. I really like books that have two stories that eventually connect in neat ways and this one was no exception. It is fascinating to see how Henry is reacting to discoveries in 1986 and how he acts to create those discoveries in 1942. The dual times are both well written and engaging. I turned the pages quickly no matter which time they were in.

The beautiful language helped create the ambiance of this novel well. This was one of those books where I want to write down every other sentence because they were just so lovely. Seriously, I couldn’t get enough of the descriptions of their neighborhoods, camps, and people. The world of this novel seems like it’s right outside my door–like I could step into it and experience it just as it is written. 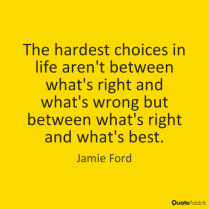 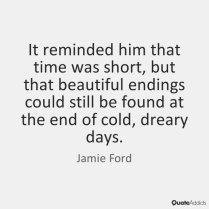 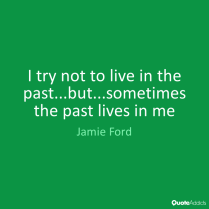 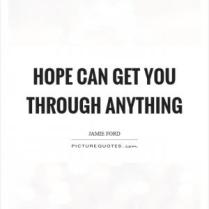 The messages in this novel are profound and intriguing. They show a lot of paradoxes in life. My head is a jumble of thoughts after finishing this book, but I want to share a few disjointed ideas. If we are taught that family comes first, how do we reconcile extreme opposing beliefs? Life is all about timing. Sometimes that timing is not fair or is hindered by forces outside our control. How do we accept the past, even if it’s not what we want to do? How do we accept change even if it’s unfairly thrust upon us? Where do we find the patience to endure life’s hardest trials and to keep the most significant promises?  For me, these questions can all begin to be answered through faith in God. But they open up so many interesting ideas and discussions.

I’m still thinking about the ending days after finishing the book. In some ways, it is perfect. In others, it is disappointing. In still others, it is hopeful. I want to change it to be how I want it to end. But I can appreciate why it finished in this way. Because the ending made me think about questions of fate, patience, promises, timing, and family, I think it is a compelling conclusion to a beautiful novel. But I don’t want to give it away because you should go read the whole book 🙂

Hotel on the Corner of Bitter and Sweet is a poignant title for a book that is both bitter and sweet. This book is full of emotion that will take you on a journey to discover the past and move into the future. I can’t recommend it highly enough.

Have you read Hotel on the Corner of Bitter and Sweet yet?
What did you think?

13 thoughts on “[Hotel on the Corner of Bitter and Sweet]: A Review”

[A Pursuit of Home]: A Review