Suddenly I find myself under a massive pile of reviews that need to be written. It seems I’ve caught my reading bug again in March (phew! this second part of trimester #2 is so much better!) and now I am reading like crazy. This is a great problem really. I prefer having more to blog about rather than less. Luckily I usually jot some ideas down in Goodreads for potential reviews later.

Today I am excited to share a review of Austenland by Shannon Hale. As mentioned in a few recent posts, I was on a bit of a Shannon Hale reread kick to start 2020 and realized I hadn’t actually reviewed most of those rereads. So after posting about Book of a Thousand Days and Enna Burning & River Secrets, I knew I had to share some thoughts about Austenland.

I’ve read this book several times over the years. It’s just such a fun, light-hearted story that makes me smile. I actually love reading it on my Kindle app. Not sure why it sticks with me so easily on there but I continue to go back to it.

According to Goodreads, “Jane Hayes is a seemingly normal young New Yorker, but she has a secret. Her obsession with Mr. Darcy, as played by Colin Firth in the BBC adaptation of Pride and Prejudice, is ruining her love life: no real man can compare. But when a wealthy relative bequeaths her a trip to an English resort catering to Austen-crazed women, Jane’s fantasies of meeting the perfect Regency-era gentleman suddenly become realer than she ever could have imagined.

Decked out in empire-waist gowns, Jane struggles to master Regency etiquette and flirts with gardeners and gentlemen;or maybe even, she suspects, with the actors who are playing them. It’s all a game, Jane knows. And yet the longer she stays, the more her insecurities seem to fall away, and the more she wonders: Is she about to kick the Austen obsession for good, or could all her dreams actually culminate in a Mr. Darcy of her own?”

I think Jane is such a fun, relatable protagonist. Perhaps that’s because I can totally relate to her secret obsession with Austen heroes. Ha! I love that her great aunt leaves her the vacation to Pembrooke Park and that Jane actually goes–and enjoys herself too! Her voice is honest and nerdy throughout the novel–sharing why she loves Pride and Prejudice and embracing the eccentricities of Pembrooke Park. Jane seems more embarrassed than confident at the start of the novel. And I was glad to see her gain some confident by the end and to not completely give up on Mr Darcy. Plus, I am really glad she got her happily ever after.

The characters are hilarious and sometimes just ridiculous. From other guests to Mrs Wattlesbrooke (owner of the estate), we get a lot of colorful and silly characters in this story. Miss Charming is just plain funny. You never know what will come out of her mouth. Martin is a surprise. He seems grounded in reality until you really get to know him. Captain East and Miss Heartwright are almost a classic Austen couple until you hear her accent at the end. I think Henry Nobley is my favorite character because he doesn’t quite fit in this modern Austen world. Yet he is the one that makes Jane feel like she belongs. I loved their awkward rehearsals for the play and the ways they manage to get to know each other beyond petticoats and cravats.

I enjoyed the light tone of the novel and the way we get pieces of Jane’s past along the way. It reads a lot like a journal which makes the story a quick and easily engaging read. I always read this one in about 24 hours or less because it’s so easy to get into. For whatever reason, I really enjoy the way Jane numbers her boyfriends and how most of them were not even boyfriends. It’s something many girls do! We overthink things and create relationships when boys sometimes are unaware. Jane is able to let go of some of those teenage tendencies and it’s a fun twist how she reacts to her perfect Austen proposal at the ball. The light tone made this story fun and fluffy. There’s not a ton of hidden meaning behind the empire waists and turns about the room, but it sure it fun to get lost in the experience.

Overall, this book is such a delight for Austen fans and should not be over-analyzed as more than it is. I love every time Jane quotes an Austen book or references a particular Austen character. I love the quirks of pretending to live in Regency England from the clothes to the proper manners. I love the hilarious interactions between other guests and the way Jane both breaks character and celebrates her character. This is not a book that’s trying to be an Austen novel. But it’s also not trying to make fun of them either. I think it’s celebrating the way Austen continues to such a popular author and the ways her novels still speak to women today. There is something special about an Austen novel. And while this certainly isn’t going to be a classic in the same way Austen is, it’s a fun and sometimes silly tribute to her legacy.

This is a beach read, chick lit, a fluffy read–and I love it for those titles. If you are looking for something to get you out of a reading rut or just something to make you laugh, this is the book for you. It will make you laugh and you may find yourself relating more than you expect to our Colin Firth loving heroine.

What are some of your favorite Austen inspired novels?
And if you’re going to read one novel from Austen herself, which would you pick?

3 thoughts on “[Austenland]: A Review” 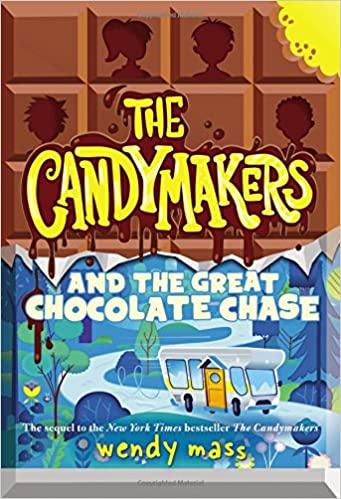 [The Candymakers and the Great Chocolate Chase]: A Review