I’ve been in a bit of a slump when it comes to blogging and reading lately. I think it’s connected to chasing kiddos all day and just feeling exhausted when they are finally in bed. Makes me crave chocolate and a great 90’s chick flick (just watched You’ve Got Mail for the hundredth time this weekend and totally cried as always!). Anyways, I am not really that far behind in my reviews. But my motivation is down. So here I am trying to get it back up!

During our extended vacation to see family, I (of course) brought a few books to read. The first was Destiny of the Republic: A Tale of Madness, Medicine, and the Murder of a President by Candice Millard. My mom recommended it to me after she read it for her book club. It’s a nonfiction book written with incredible style and grace. I was blown away!

This is the kind of book you carry around just so people see you reading it. Because you feel intelligent just holding it. It’s also a book that takes time to read. There is no speed reading of this book. The language is evocative, intense, dense, and engaging. 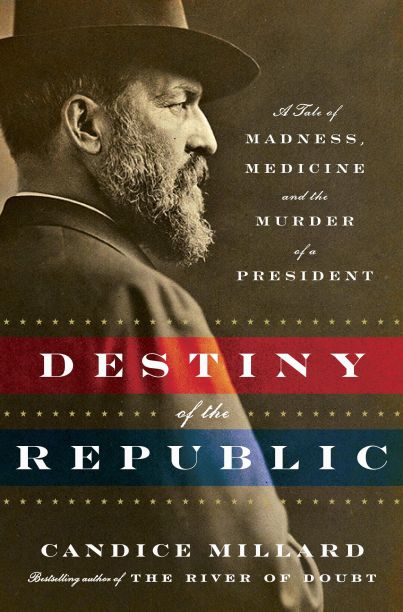 Destiny of the Republic: A Tale of Madness, Medicine, and the Murder of a President by Candice Millard chronicles the fascinating life of James A. Garfield. Goodreads summarizes, “James A. Garfield was one of the most extraordinary men ever elected president. Born into abject poverty, he rose to become a wunderkind scholar, a Civil War hero, and a renowned and admired reformist congressman. Nominated for president against his will, he engaged in a fierce battle with the corrupt political establishment. But four months after his inauguration, a deranged office seeker tracked Garfield down and shot him in the back. But the shot didn’t kill Garfield. The drama of what happened subsequently is a powerful story of a nation in turmoil. . . . As his condition worsened, Garfield received help: Alexander Graham Bell, the inventor of the telephone, worked around the clock to invent a new device capable of finding the bullet. Meticulously researched, epic in scope, and pulsating with an intimate human focus and high-velocity narrative drive, The Destiny of the Republic will stand . . . as a classic of narrative history.”

James A. Garfield was a remarkable man and a compelling character in this book. He is honest, hard working, driven, humble, and genuine. He is the type of man I would want to be the president, the type of man I hope my children will look up to. From the first page, I wanted him to succeed. From learning about his difficult childhood in rural poverty, to his rise to the presidential nomination and the presidency, I wanted him to be happy and successful. He loved his books, his country, his Ohio home and his family. He cared about the American people and was honest and trustworthy. Because he is so likable, Garfield’s tragic story is all the more upsetting. He could have done so much good for this country. He could have reformed more and influenced more and changed more. But he didn’t. Somehow, the knowledge of what happens to him after the shooting makes his character even more admirable. I respect this man. And I wish I knew more about him previous to this book.

A few favorite quotes about Garfield’s character and from his own mouth:

“There is no horizontal Stratification of society in this country like the rocks in the earth, that hold one class down below forevermore, and let another come to the surface to stay there forever. Our Stratification is like the ocean, where every individual drop is free to move, and where from the sternest depths of the mighty deep any drop may come up to glitter on the highest wave that rolls.”

“In Garfield’s experience, education was salvation.”

“The horror and senselessness of [Garfield’s] death, and the wasted promise of his life, brought tremendous change to the country he loved – change that, had it come earlier, almost certainly would have spared his life.”

Destiny of the Republic

The storytelling of this book is gripping and complex. It reads more like a suspenseful mystery novel than a biography. The way the story engages the reader is so impressive. The moments leading up to the shooting and directly afterwards are harrowing. I felt a wave of emotions as Garfield leaves home happy and hopeful, followed by denial and fear as he walked past his would be assassin, and finally frustration and shock as Millard describes the archaic ways the doctors sought to “treat” the president’s wound. It was fascinating to read about such a compelling period in American history. Millard deserves high praise for infusing such drama and emotional turmoil into a time that is not well know. She takes political party conventions and a presidential sick room and turns them into compelling and interesting settings for her tale. The storytelling makes this novel great.

I could not believe the drama after the shooting and the debates about medicine and disease discussed in this novel. This takes place before man had a lot of knowledge about disease. Doctors didn’t believe germs existed or that antiseptic actually worked. The doctors that treated Garfield would stick their fingers into his wound to try to find the bullet. They brought him into contact with all sorts of germs. Millard even says that if Garfield had lived today, the wound would have been so minor that he would only have to stay a night or two in the hospital. How blessed we are to live in a time where medicine and health are so advanced, almost taken for granted. I kept reading parts of this book out loud to my husband and saying things like “can you believe that?” or “how could they do this?” It was fascinating to me to read about the medical debate at this time. It represents such a turning point in American history–in medicine, in politics, and in national patriotism.

A favorite quote about the magnitude of these events:

“Garfield’s shooting had also revealed to the American people how vulnerable they were. In the little more than a century since its inception, the United States had become a powerful and respected country. Yet Americans suddenly realized that they still had no real control over their own fate. Not only could they not prevent a tragedy of such magnitude, they couldn’t even anticipate it. The course of their lives could be changed in an instant, by a man who did not even understand what he had done.”

Destiny of the Republic

The ending is emotional and compelling. You know how it ends (or at least you can look up how it ends). But that doesn’t stop you from cheering for Garfield and praying for his recovery. As I read about the interactions between doctors, politicians, and friends, I felt a whole spectrum of emotions–love, fear, anger, excitement, and despair. You will leave this book feeling more intellectual and more invested in education and building up those around you.

This book surprised me, in the neatest ways! It is a fascinating glimpse at a little discussed time in American history that deserves more credit for the ways it changed the world of medicine and politics. Again, this is not a book you can read quickly. Usually that was fine, and I enjoyed the details. But a few points were less compelling and harder to get through. Overall, though, a unique and compelling read!

What are your favorite time periods in American history?
And which historical biographies should I read next?

5 thoughts on “[Destiny of the Republic]: A Review”

Top 10 Tuesday: TBR Before I was Born

[Percy Jackson and the Olympians]: A Series Review

[Tumtum and Nutmeg: Adventures Beyond Nutmouse Hall and The Rose Cottage Adventures: A Double Review