Hi everyone! I am really excited about this post. I have been seeing a lot of reviews of The Martian by Andy Weir. And I kept hearing how great the movie is but I wanted to read the book first!

Finally, I got it at the library last week. And then I devoured it in 24 hours. Yes, 24 hours. I was just hooked, and I had to see how it ending! It’s been a while since a book snagged me that intensely.

*I use spoilers in this post in order to give my full opinion of the novel. 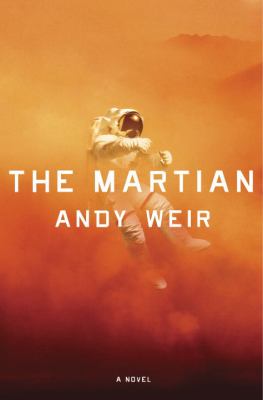 The Martian by Andy Weir follows the dramatic story of Mark Watney–an astronaut stranded on Mars after a severe dust storm forces his crew to evacuate their mission. It will be years before a rescue mission can be sent to help him. Mark must work to survive on a planet where nothing grows, the atmosphere does not sustain life, and his equipment could fatally malfunction at any moment. So he gets to work. Through his ingenuity and determination, Mark plants potatoes and harvests them, he finds the Pathfinder probe to communicate with Earth, and makes an unheard of journey to reach the ship that could take him home. Will Mark be rescued by NASA or will human error be his downfall?

Mark’s story surprisingly kept my attention despite his isolation. When I first heard about this book/movie, I was skeptical about a whole book about a single person. How would I stay excited about a story with no interactions between people? First, this book follows Mark’s story through his eyes, the viewpoints of several NASA authorities, and the perspective of Mark’s fellow crew members. I enjoyed getting different perspectives on the same events–the initial discovery that Mark is alive, his overnight journey to find pathfinder, navigating the sandstorm on the way to Ares 4, the list goes on. These varying views create an exciting and engaging plot that kept me turning the pages through the night.

I also stayed invested in this novel because Mark’s character is determined, funny and witty–despite the overwhelming odds against him. From the beginning, we know that he will probably die on Mars. And yet he cracks jokes about food and waste, problem solves how to farm, and hates on Commander Lewis’ disco music. Mark is a likable protagonist. I enjoyed reading his parts and I found myself cheering for him from the beginning. He didn’t feel too sorry for himself and he never blamed his crew for leaving him behind. I respected that.

Will he survive? This question was at the center of this novel and kept me reading. It also drove me crazy just a bit. Everything would seem to be going great–he set up the potato farm then the Hab blows up. He manages to make contact with NASA to get direction and short-circuits the connection with a drill. He figures out how to travel to Ares 4 and he nearly dies in a sand storm then rolls over the rover (but miraculously everything survives). He gets into orbit but not high enough. The list goes on! I can appreciate that the twists and turns of the novel make it exciting and engaging. But it seemed like just about everything went almost completely wrong–then saved at the last minute. It was a roller coaster of emotions reading this story!

I loved the positive view of humanity in this novel. I love that one life is worth doing everything to save it. I love that his crew comes back to try to save him and the whole world is gripped by Mark’s story. This novel gives me hope for the future of humanity. It shows that we are innately connected as humans and that connection pushes us to serve and rescue each other–no matter the cultural or psychological barriers. I really enjoyed the ending of the novel. But I won’t go into the specifics of how it ends 🙂

After I finished the novel, we rented the movie from Redbox. I really enjoyed it.

First, Matt Damon plays Mark Watney, and he is seriously a fantastic actor. He captures Mark’s humor, personality and emotional journey quite well.

Seeing all the NASA authorities working together and travelling from place to place helped orient their parts of the story better. And I love the connections many actors had to other great films (like LOTR). The crew of Ares 3 was well cast–I appreciated their emotion and their bravery. Wow, that ending launch into Mars’ orbit is ridiculous with all the tinkering Mark did to the MAV. However, the movie had too much swearing for me and that random nude scene. But it was funny, exciting, and gripping. My only question is why is the ending so different and non-scientific?

Definitely a different book than my usual genres. But also well worth the read.

What did you think of The Martian? Top 10 Tuesday: TBR Before I was Born

[Percy Jackson and the Olympians]: A Series Review

[Tumtum and Nutmeg: Adventures Beyond Nutmouse Hall and The Rose Cottage Adventures: A Double Review