The FINALE of the Dragonwatch series, a sequel series to Fablehaven, is here!! It released Tuesday and you better believe I preordered a copy and finished it in 24 hours. This book was amazing!!

In preparation for the release, I read all 5 Fablehaven books, the previous 4 Dragonwatch books and the beautifully illustrated Legend of the Dragon Slayers (which I highly recommend reading before starting this one–so many helpful details!). It was so fun to have all the stories in my head as I read this one!

Return of the Dragon Slayers by Brandon Mull is the fifth and final book in the Dragonwatch series that continues the story of Kendra and Seth Sorenson, siblings that discover magical preserves around the world. There was so much that had to happen in this book!! So many details, so many characters, so many battles and how would it all end?

This one definitely lived up to my expectations. What a finale to two favorite series!

**Lots of spoilers in this review because this is a series finale. It’s basically impossible to talk about without some.
Don’t read if you want to experience the magic for yourself!** 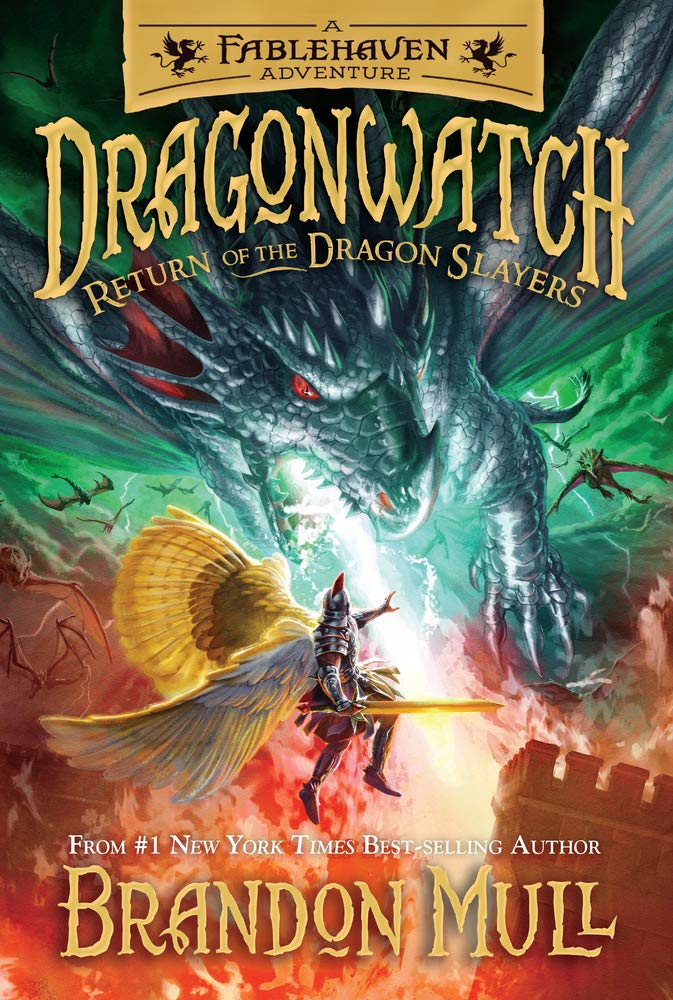 Book Summary: “The magical world teeters on the brink of collapse. The Dragon King, Celebrant, has united the dragons into a vengeful army, and only a final artifact stands in the way of them unleashing their fury against humankind. With established allegiances shifting under the strain, Seth and Kendra find themselves in desperate need of new allies.

Seth must face his most dangerous quest—the fulfillment of his pledge to the Singing Sisters. With only Calvin the Tiny Hero at his side, Seth needs to collect the pieces of the Ethergem, including the stones from the crowns of the Dragon King, the Giant Queen, and the Demon King.

Halfway across the world, Kendra finds herself torn between her duty to Dragonwatch and her desire to rescue Bracken. Can she challenge Ronodin’s control of the fairy realm without leaving the five legendary dragon slayers to be hunted by Celebrant and his sons?

Left behind at Titan Valley, Knox and Tess must survive the aftermath of the Giant Queen’s fall. Will the secret crown in Knox’s possession prove too much for him to handle?

In this fifth and final volume of Dragonwatch, our heroes make their last stand at the hidden Kingdom of Selona. For the defenders of light to stand a chance, the legendary dragon slayers must arise, lost secrets must be uncovered, and ancient powers must awaken. Get ready for the gripping, revelatory, and unforeseen conclusion to the epic ten-volume New York Times best-selling Fablehaven and Dragonwatch series.“

This book has the biggest scope yet within this universe and Mull handles it well. I think the risk of growing your fictional world is that it can get too complicated or lose some magic. But Mull’s world building does not loose it’s spark. There are a lot of myth and origin explanations in this book. We learn about the origins of light and dark magic, more details of the dragon slayers myth, origins of demons and fairies and preserves. There are new places and new types of magic. But they fit well into the world that Mull has already built. There are connections to former books and former conversations between characters. While the details of places like the Void or the Source are new, the ideas have been there all along. I really enjoyed how some mythical places like Selona become central to the story. Overall, I think this book augments what we already know about Fablehaven and beyond. And I loved learning more about the myths and stories that make all the magic possible.

Kendra and Seth both go on meaningful and surprising character journeys in the finale. I think I was more surprised by Kendra’s journey. Both that she seeks out demons for aid against the dragons and that she is so courageous in her fight against Ronodin. She has come a long way from the rather nervous, innocent leader of the fairy army in Fablehaven. Her confidence and strength are beautifully developed in this book. And I enjoyed learning more about her magical abilities in this one. And the ending with her and Bracken is just lovely. Seth’s journey was also surprising and beautiful. I was worried about him at the start of the book as he journeys deeper into darkness. Every time he killed with the Unforgiving Blade I grew more nervous for how his story would end. While the end of his journey involved some new locations, it worked for me. I appreciated what Seth’s experiences taught about balance between dark and light. Going too far down either path is unwise and can limit you. Both of these fantastic protagonists have taught us that we all have dark and light inside us. We will make mistakes. But it’s how we learn and grow from those that define us. And it’s never to late to try to make things better.

As usual, this book boasted an action packed plot that doesn’t feel repetitive of earlier books. How does Brandon Mull continually surprise me? I was hooked from the first page and couldn’t put it down until I finished it. At first, all the main characters are scattered across the world. So I wanted to read to see how they would find each other! Then as they connected, I couldn’t see how they could defeat the dragons! There were some surprising betrayals and unexpected twists especially for Kendra and Seth. The final battle against the dragons was epic in scale, intensely violent (which wasn’t unexpected — this is a dragon war after all), and shocking in how it all ends. Perhaps the only thing I expected to see but didn’t was a bit more sacrifice from our heroes. Although, there were meaningful changes for many characters and they certainly all fought valiantly. I loved how the book ends back at Fablehaven with Seth and Kendra in the attic. It felt like the whole 10 book series came full circle. And although I wanted more details about the future, I felt satisfied with how it all ended.

Overall, I loved this book and this sequel series! There is something so fun about reading a series that captivates you. Waiting for the next book to come out. Meeting new characters. Feeling nervous, exciting, and so desperate to read the next installment. Exploring new worlds and experiencing the stories for the first time. And devouring the finale. Reading Dragonwatch and Fablehaven has reminded me of reading Harry Potter and The Lord of the Rings. Some of my favorite reading experiences! These series deserve a place on the bookshelf of best fantasy series.

What are some of your favorite fantasy series?
Any Fablehaven fans out there? Which books are your favorites? 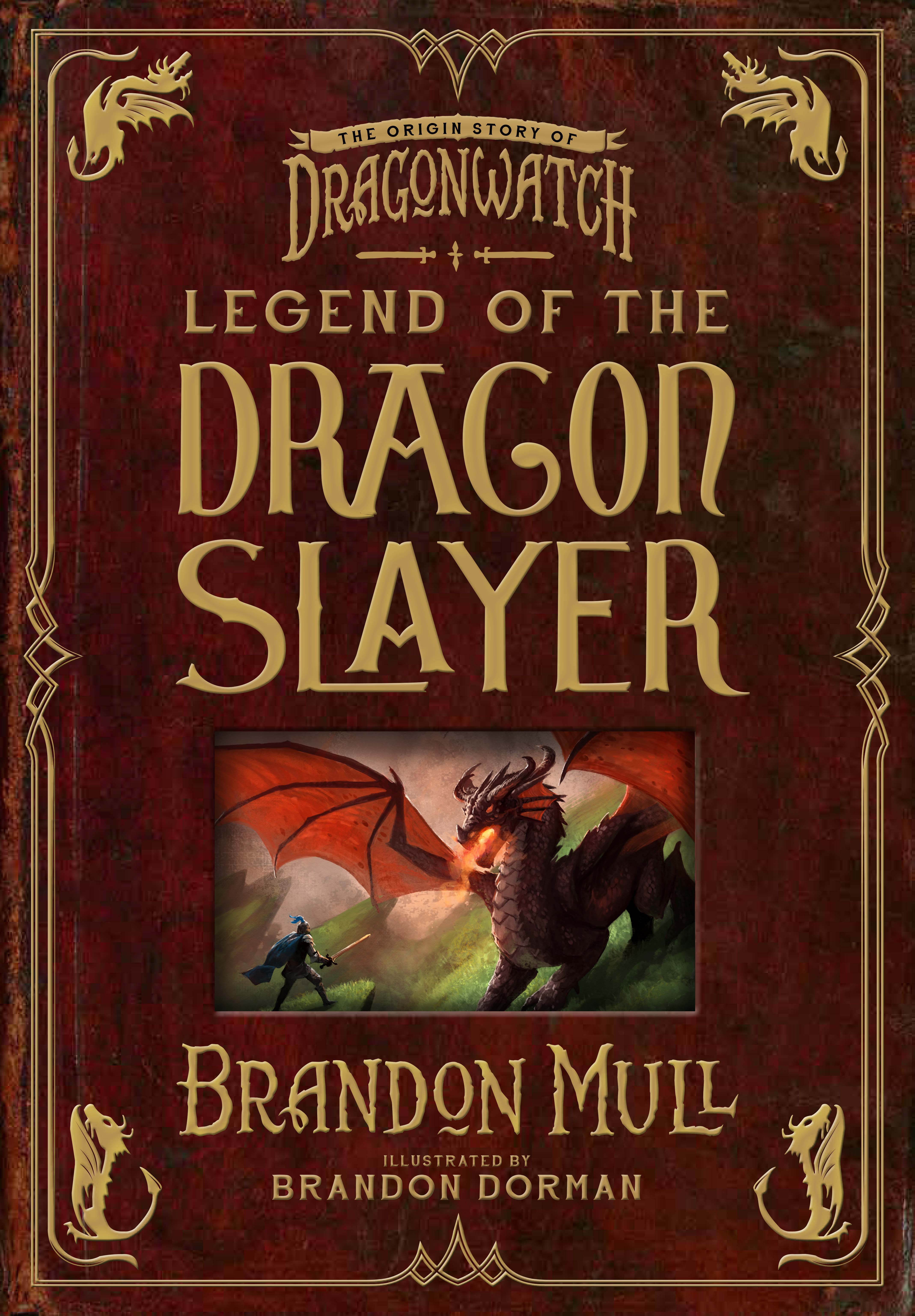 I’d also like to put in a plug for Legend of the Dragon Slayer: The Origin Story of Dragonwatch by Brandon Mull and illustrated by Brandon Dorman. This is such a beautiful book! The quality is fantastic and the pictures are gorgeous.

Book Summary: “In ancient times, dragons posed the ultimate threat to the rest of the magical world. During the Dragon War, a group of specially trained Dragon Slayers banded together to stand against the onslaught. They called themselves Dragonwatch, and they succeeded in confining the majority of dragons to sanctuaries. Legend of the Dragon Slayer is the illustrated story of the very first Dragon Slayer who took to battle.

As the legend tells it, powerful monsters terrorized the kingdom of Selona on all sides. An unlikely hero named Konrad, the cobbler’s son, accepts the king’s challenge to defeat the monsters: fierce yeti, a merciless vampire, a dangerous gorgon, and a deadly phoenix. But Selona’s biggest threat will come from the Dragon, and it will take every ounce of wit and experience that Konrad has acquired to stand a chance against such a formidable foe.

Legend of the Dragon Slayer features a never-before-published catalog of Dragon Slayers, a detailed map of the kingdom of Selona, and lavish full-color illustrations. Fantasy fans will love this stand-alone tale of valor, destiny, and magic.”

I loved the way this told the story of the legendary dragon slayers and the appendix of dragon slayers at the back was very helpful. I read it in place of the story in the text of book 4 of Dragonwatch. It fits within that larger story but stands alone as well. It’s a simple story without too many details. I read it in one sitting. Loved the storytelling and mystery surrounding it. And I found it so important to understanding the action and myths in book 5!

This book reminds me a lot of the companion books JK Rowling has published within the Harry Potter universe. Definitely a great addition to my collection!

My Reviews of all 5 Fablehaven books and the 4 previous Dragonwatch books can be viewed here.

One thought on “[Dragonwatch: Return of the Dragon Slayers]: A Review”